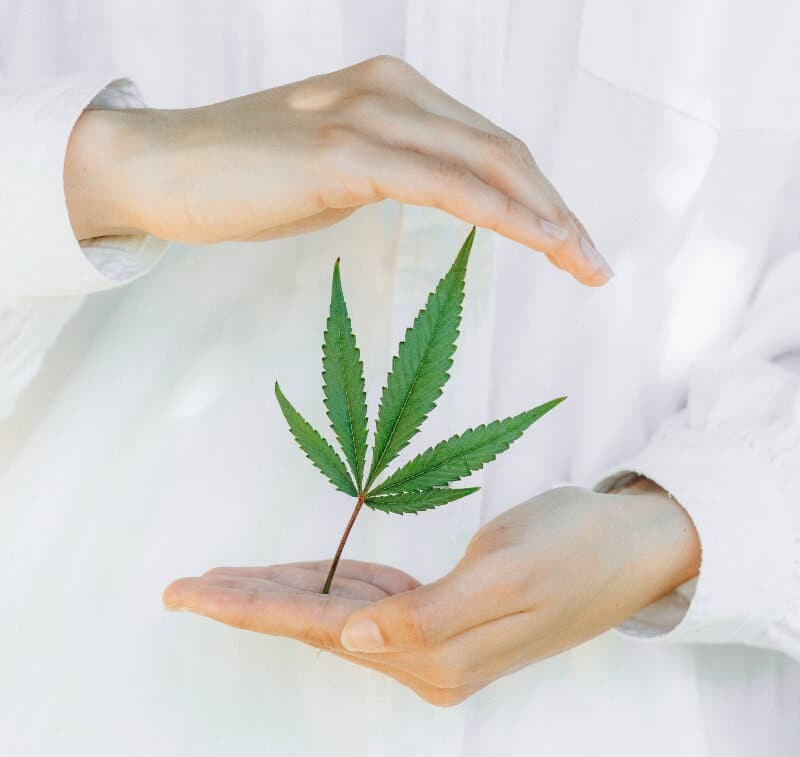 Cannabigerol (CBG) is a natural compound found in cannabis. While the research on CBG is not as extensive as CBD, the studies suggest it may have powerful anti-inflammatory properties.

One of the most well-known cannabinoids, CBD, has been thoroughly studied for its ability to reduce inflammation and is thought to have many other therapeutic benefits.

Naturally, the attention is starting to shift to other cannabinoids like CBG to see if they carry the same potential in treating different health concerns.

This article will explore how CBG might help relieve symptoms of inflammatory conditions and its effects on pain.

Cannabigerol (CBG) is a non-intoxicating compound that belongs to the cannabinoid family. Cannabinoids are chemical compounds produced by the cannabis plant which interact with cannabinoid receptors in our bodies (in the Endocannabinoid System).

Unlike THC, it does not produce any psychoactive effects.

CBG is often referred to as the “mother of all cannabinoids.” This is because it is the parent compound from which many other cannabinoids (CBD, THC, CBC) originate.

As CBGA (the acid form of CBG) ages, it degrades into these other cannabinoids.

Because CBGA plays a critical role in producing these other cannabinoids, very low amounts of CBG are detectable in the plant once it is grown.

CBG may be present in cannabis in only small amounts but can be synthesized for commercial production.

Scientists are currently working on creating different strains and cross-breeding them to produce higher quantities of CBG.

How does CBG work for inflammation and pain?

CBG has anti-inflammatory properties that may help with swelling, redness, and pain associated with inflammatory conditions such as IBS or Crohn’s disease.

Research has demonstrated the ability of CBG to regulate the release of GABA, a neurotransmitter that can reduce pain, depression and anxiety, among other symptoms.

In addition, CBG regulates GABA at a much higher level than THC or CBD, and scientists believe it could be used to treat people with muscle spasms.

Exogenous cannabinoids have been studied for their ability to reduce the body’s immune response. They mainly cause the cells to die and lower inflammation from cytokines and chemokines.

This may help reduce swelling, pain and inflammation in an individual suffering from inflammatory disorders.

CBG could also help fight against chronic inflammation, which some scientists believe could be the reason behind many autoimmune disorders.

What sorts of inflammation can CBG potentially treat?

CBG can potentially help to fight numerous causes of inflammation in the body. While the research on CBG is still in the infant stage, the studies that have been done show great promise.

A person with colitis has inflammation and irritation of the colon. Colitis can be acute (lasting less than 4 weeks) or chronic (present for more than 4 weeks).

In studies exploring the use of CBG in colitis patients, researchers found that it had a positive effect on alleviating inflammation within the body.

Another study in mice found that cannabigerol (CBG) improves the effects of inflammatory bowel disease.

In this study, the results showed that CBG had a protective action in an in vitro neuroinflammation model. CBG reduced the death in cells that were treated with the medium of LPS stimulated macrophages. This helped to reduce inflammation and oxidative stress.

As a result of this study, researchers have learned that CBG may be used against neurodegeneration and encourage use in other conditions with inflammation and oxidative stress.

Cannabigerol (CBG) has certain properties (anti-inflammatory, antioxidant, and neuroprotective) that make it worth researching for inflammatory conditions that cause pain.

Research suggests that CBG is a far more potent analgesic than both THC and CBD in aiding with pain relief.

Cannabinoids like CBG offer an alternative to medications that may have more serious side effects.

Traditional methods of treatment for pain and inflammation include anti-inflammatory drugs or NSAIDs. The medicines in this family include ibuprofen (Advil), naproxen (Aleve), and aspirin, among others.

While the medications can be beneficial, they can also cause numerous side effects and complications such as nausea, vomiting, diarrhea, bleeding ulcers, and heart attacks.

These have been known to happen to people who regularly take these medicines over long periods of time.

CBG has no known side effects, but as it is commonly mixed with CBD, these should be considered. However, many of the side effects of CBD are quite mild and only experienced by a minority of people.

The most common include drowsiness, fatigue, decreased appetite, diarrhea, nausea, changes in weight or appetite, low blood pressure, or dizziness.

Is CBG better than CBD for inflammation?

CBG is not necessarily better or stronger than CBD, but instead works in tandem with it to provide enhanced benefits. This is due to something known as the Entourage Effect.

The Entourage Effect is a synergistic effect of using not just one cannabinoid but all cannabinoids together.

This theory is that the interactions and components found within the cannabis plant work together to provide increased therapeutic benefits.

In other words, using only CBG would be less effective than using CBG in conjunction with other cannabinoids like CBD.

Many retailers choose to mix CBG with CBD to provide the maximum benefits from both cannabinoids.

How to use CBG topically or internally for inflammation relief

CBG can be applied topically or ingested internally to relieve pain and inflammation. Depending on what you are attempting to treat, a mix of both of these methods may be the best course of action.

Your skin is the largest organ in your body. It performs several important functions, including protecting your internal organs from the outside environment.

Applying CBG topical products directly to the skin allows them to absorb and deliver their benefits straight to where they are needed most. For example, this may provide targeted relief for those with joint or muscle pain.

CBG topicals come in a wide range of products, including creams, salves, and pain sticks.

To use CBG topical products, apply a generous amount to the affected area and rub in.

Using CBG oil internally is done much in the same way as CBD oil. The recommended method to use is sublingual.

This is different than just swallowing it. If you swallow the oil, some of it will be broken down by the digestive tract and be rendered unusable by your body – before it ever even reaches your bloodstream.

To use CBG sublingually, measure out your dose and place it underneath your tongue. Hold it there for 30 seconds to 2 minutes (the longer you keep it there, the more CBG will be absorbed), and then swallow any remainder.

Final thoughts on using CBG for pain and inflammation

If you have a condition that causes inflammation, then cannabigerol (CBG) may help.

Unfortunately, the lack of research limits our understanding of what this cannabinoid is fully capable of just yet. Therefore, more research in this area is needed.

CBG has certain properties, such as anti-inflammatory and antioxidant effects, which can potentially treat inflammatory conditions.

Research suggests that CBG is more potent than THC or CBD when it comes to pain relief with no psychoactive side effects making this cannabinoid an exciting prospect for patients who want relief without any high.

Ready to get started with CBG? Check out our CBG Day Drops, CBG Pain Sticks or CBG Gels in the shop today!