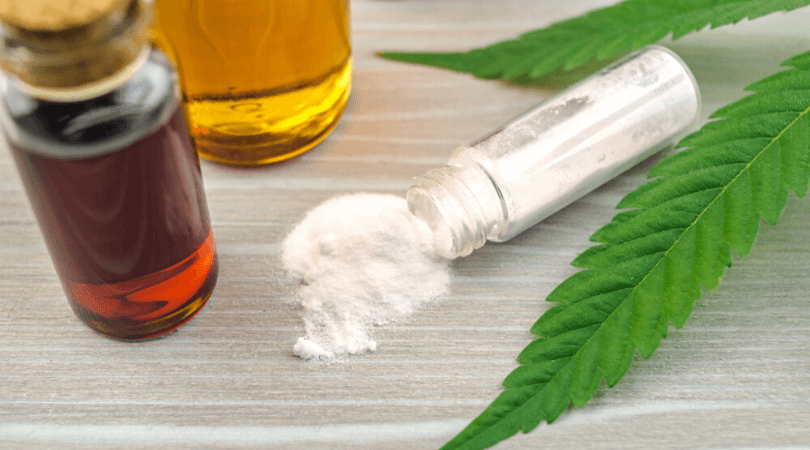 The public profile of cannabidiol (CBD) has soared in recent years with a lot of people using it to seek relief from a wide variety of health conditions. CBD is an all-natural cannabinoid found in cannabis, such as hemp, and can be extracted from the plant in the form of CBD oil. As more CBD products become available on the market each day, it would help to find out more about CBD isolate (the purest form of CBD) and what it is used for.

How CBD Isolate Is Made

The process of producing CBD isolate involves multiple stages. It starts with selecting the right hemp flower or biomass. The next step is drying and decarboxylating the hemp material, ideally to reach at least 10 percent CBD content. This is followed by extracting CBD oil from hemp to achieve about 50 percent CBD extract, then refining the oil to get rid of contaminants and achieve 60 percent refined CBD oil.

The process moves to the distillation of refined CBD oil to get about 80 percent concentration. The process of chromatography purifies the CBD concentrate. At this point, natural components of CBD, such as terpenes, flavonoids, and other impurities, have been filtered out. CBD is further refined and collected in solid form through a process called crystallization.

Crystallization is a key step in CBD isolation. This usually involves strong solvents to eliminate tetrahydrocannabinol (THC), the main psychoactive compound in cannabis. This final step in the manufacturing process leaves only the CBD chemical compound in the form of a white crystalline powder containing 99 percent pure CBD. The cannabidiol that was isolated down to the single molecule is called CBD isolate, which is the most potent CBD product available on the market. It is also known as CBD crystals, CBD powder, and CBD dust.

What Are the Two Kinds of CBD Isolate?

CBD has shown preliminary efficacy in treating various physical and mental health issues, such as anxiety. A 2019 study published in The Permanente Journal shows how CBD is tolerated well by most people. The report also says the substance can potentially benefit people suffering from anxiety disorders. In the study of adults with sleeping problems or anxiety issues, researchers discovered that 79 percent of the respondents who used CBD reported decreased anxiety. Almost 67 percent also had improved sleep scores within the first month, but the numbers fluctuated over time.

In the same year, a team from Kyoto University in Japan explored the effect of CBD on anxiety, analyzing Japanese teenagers who had social anxiety disorder (SAD) and avoidant personality disorder. The results indicate CBD could significantly decrease social anxiety in teenagers.

A lot of people also use CBD in an attempt to get relief from some sort of pain. A study conducted by a team from the University of Belgrade in Serbia suggests that cannabinoids like CBD can treat chronic pain in adults. Further evidence supporting this claim can be found in the Journal of Experimental Medicine, which indicates that pain and swelling could be managed by therapeutic agents in cannabinoids. Arthritic pain, in particular, could be lessened, according to a 2015 article published in the European Journal of Pain.

CBD also appears to show promise with its anti-convulsant effects. As discussed in a 2017 study published in the Journal of Epilepsy Research, there seems to be strong evidence that CBD can alleviate seizures in patients suffering from certain epilepsy syndromes. This was further backed up by an article cited in the Journal of Clinical Investigation last year. The researchers discovered that a single injection of CBD significantly reduced the severity of seizures in mice.

A lot of people opt for CBD isolate for several reasons. First, CBD isolate is very easy to measure, which allows users to accurately determine its potency.

Besides, many people find its versatility attractive. CBD isolate has no odour or flavour, so it can be taken on its own or infused with pretty much anything you eat or drink. It can be sprinkled in your salad, stirred into soups and sauces, or blended into your favourite brownie batter. You can also add it to coffee, tea, juice, or smoothies.

CBD isolate can also be used for vaping, dabbing, or creating your own CBD topicals. Aside from that, CBD isolate has no detectable THC. This is best for new users who are still hesitant with cannabinoids. Even people who are more experienced with cannabis but are sensitive to THC or other cannabinoids appreciate CBD’s isolate’s zero-THC.

Lastly, if you are a police officer, military service member, or emergency first responder who undergoes drug screening regularly, then this pure form of CBD is probably your best option.

As of this writing, CBD is a strictly regulated phytocannabinoid in Canada. This means that it is illegal to possess CBD if you are underage, sell it without a license, buy from unauthorized providers, or bring it across national borders without meeting the criteria set by the government.

Under the Cannabis Act, CBD is only legal when sold in compliance with the act and its regulations. A federal license is required by cultivators who intend to sell cannabis. No matter where you derived your CBD, a processing license is also necessary to manufacture products containing CBD. Only retailers and sellers authorized by the government should sell CBD products.